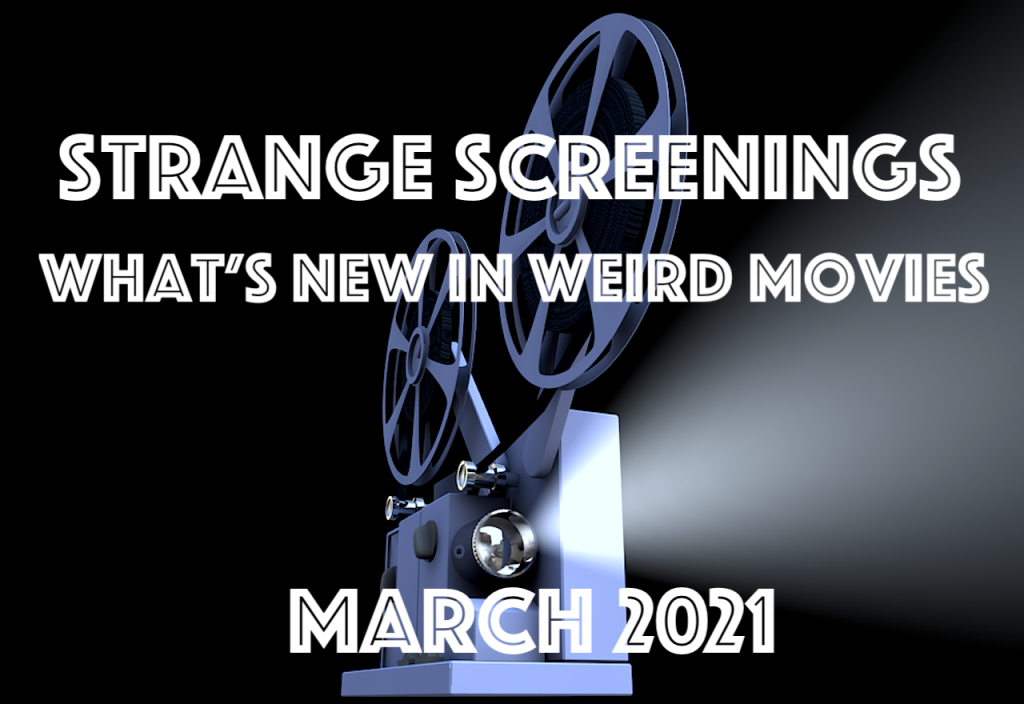 A roundup and rundown of what’s happening now in bizarre cinema. For reviews, events, and festival coverage of the cinematically surreal, bizarre, cult, oddball, fantastique, strange, psychedelic, and the just plain WEIRD, check out 366WeirdMovies.com.

The Wanting Mare (2020): Set in a fantasy world (created digitally by a small team of first-timers on a low budget), the slow-paced story involves a dream of horses shared by generations of women. Critics have been universally positive. Due to the pandemic, the movie seems to be debuting in virtual cinemas only (for the time being, at least), and is also being released contemporaneously on Blu-ray. The Wanting Mare official site.

The Father (2020): Sure, it’s Oscar Bait, but hear us out: The Father puts you inside the head of a man suffering from dementia, meaning you can’t be sure what’s real and what’s not. Basically, it’s a psychological thriller in sensitive drama garb.  Opening in New York and LA the end of February, going wider March 12. The Father official site.

Saint Maud (2019): A young and devout hospice nurse seeks to save souls—then the body horror sets in. A hit at last year’s Fantastic Fest that got picked up by A24. Those are good credentials. We’ve been waiting on this for a while; it was originally supposed to be out in Summer 2020, but was pushed back by the pandemic. Saint Maud official site.

Getty (2021): An experimental film composed entirely out of public domain stock footage from Getty Images. It’s stitched together from three different directors, with a framing device of an artificial intelligence describing humanity to alien visitors in the distant future (“they liked breaking things . . . they liked it a lot”). Includes nudity (stock footage nudity? yes, it exists), so it may be slightly NSFW. Watch Getty free on Vimeo.

Annette (2021): A musical based on the music of cult band Sparks (whose songs were featured in Holy Motors and The Forbidden Room), directed by Leos Carax, starring Adam Driver and Marion Cotillard. We can’t swear this will be weird, but look at that collection of talent again. Here’s some info from The Playlist.

Memoria (2021): Apichatpong Weerasethakul‘s first English-language film will star the dependably odd Tilda Swinton as a Scottish woman traveling in Colombia who, according to the spare plot description, “begins to hear strange sounds.” Neon will distribute. Film Comment posted a set diary from a writer working on a book about “Joe.”

Nocebo (202?): A fashion designer comes down with a mysterious illness, with symptoms that are recognized by her Filipino nanny. Eva Green will star alongside Mark Strong and Chai Fonacier. This plot seems like it could just be a run-of-the-mill psychological horror film, but it is helmed by Lorcan Finnegan—fresh off a weird one in Vivarium—and producer XYZ Films has been involved with both Mandy and the upcoming Sion Sono/Nicolas Cage feature Prisoners of the Ghostland, so there is serious weird potential there. No official site yet.

Wonka (2023): A prequel to Willy Wonka and the Chocolate Factory (or—a distressing possibility—to Charlie and the Chocolate Factory) exploring eccentric chocolatier Wonka’s early years. With Paddington‘s Paul King at the helm, this is highly unlikely to explore the character’s weirdness, but we’ll keep an open mind for the time being. More info at The Hollywood Reporter.

Poor Things (202?): Giorgos Lanthimos’ next movie will star Emma Stone as a woman who has a fetus’ brain implanted in her head. Thanks to Paste for the news.