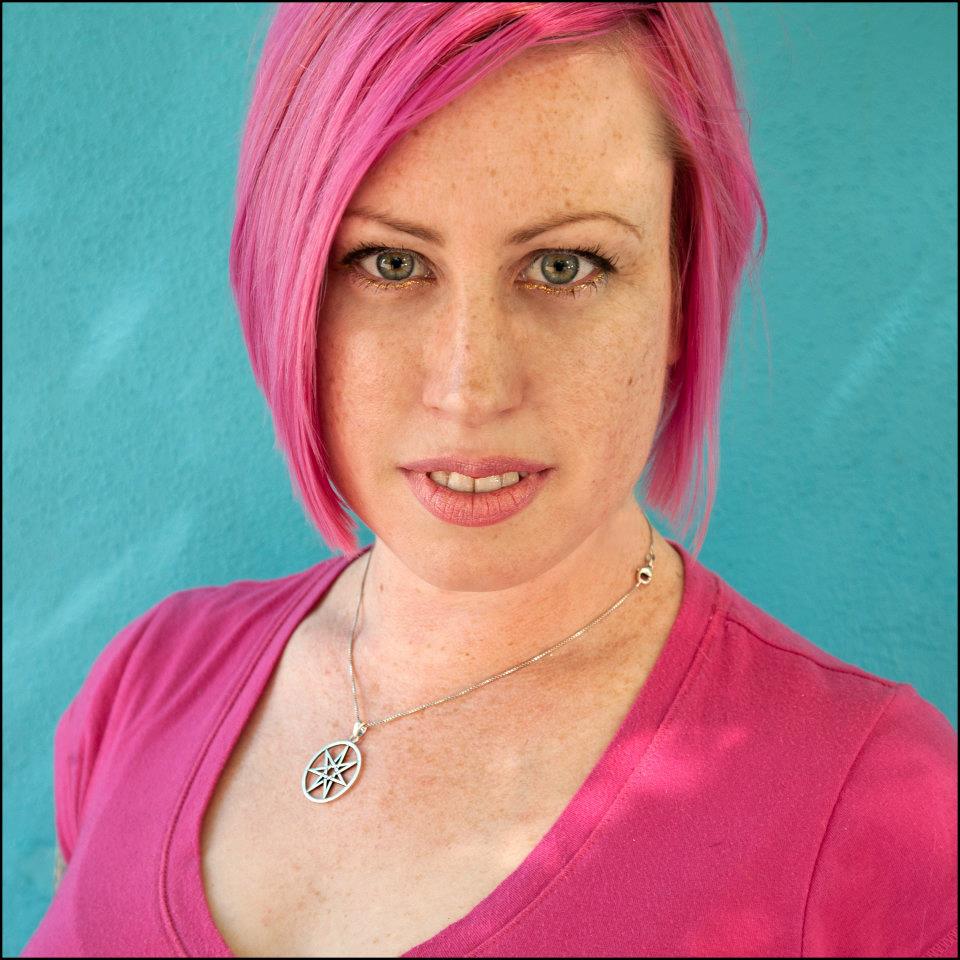 “Take what you do seriously, but never take yourself too seriously.” That is the motto of Eraserhead Press, the largest and oldest publisher of bizarro fiction. Read any of their catalogue of almost 400 titles and you’ll see what they mean. Since 1999, they’ve been putting out quality books by some of the most recognizable names in the genre.

At the helm of Eraserhead is Rose O’Keefe—instantly identifiable by her penchant for pink and buoyant personality. I had the great opportunity to “sit down” with Rose and talk shop.

ZÉ BURNS: What drew you into the world of publishing?

ROSE O’KEEFE: A desire for connection. I want to connect with people who are open-minded, creative, and passionate. Those who look at life with an artistic or uncommon point of view and who see the beauty in things that other people consider weird. Those who are not afraid to go into the dark and make light. Believers in the power storytelling has to bring us together and change our culture for the better.

At times when I’ve felt the most disconnected from others, books have always been where I’ve found solace and kinship. Reading and sharing stories has had an incalculable impact on my life and I want that experience for everyone. Owning a publishing company allows me to share that passion, connect all of my creative interests, and collaborate with all sorts of visionary people. Not only readers and writers, but also artists, filmmakers, booksellers, reviewers, journalists, event planners, educators, community organizers, business owners, and artistic performers of all types around the world.

RO: Bizarro fiction is the literature this world needs. It is tonic for the emotional disconnection that we are experiencing in our ever-increasing technologically connected world.

If you are like me, you see the problems that are occurring as we struggle to adapt to new and changing forms of communication. People feel connected yet vulnerable, connected yet isolated, connected yet misunderstood. But one thing remains the same no matter the method of conveyance: The power of storytelling.

No matter what form it takes (book, movie, live performance, visual art, blog post) storytelling has the ability to influence people’s thoughts and emotionally connect them. Bizarro fiction, in particular, does this through the use of surprise, pattern interruption, and weirdness. It asks the reader to suspend their preconceived ideas about the nature of reality and creates the conditions for the most direct way of stimulating the audience’s imagination.

RO: Because my goal is to connect with people, the most rewarding part of the publishing process is when we succeed in making those connections. When I read a writer whose work speaks to me and makes me want to share it with everyone. When readers connect with the books we publish and enjoy them. Like the people who’ve told me they never liked reading until they started reading bizarro fiction, or the soldiers stationed in Afghanistan who read our books for a bit of welcome escapism, or the readers who have told us that reading our books helped them to come out to their friends and family, or the people who were inspired from reading our books to start writing their own.

When it comes to the hardest part…well, everything about owning a business is hard. Lol. I’d be lying if I didn’t admit that. And staying in business for 21 years, I’ve faced many challenges. Right now, I’d say that the hardest part of the publishing process is navigating uncertainty with a strong resilient spirit.  Currently, the publishing industry is holding pretty steady but there is still a lot of uncertainty. There has been a decrease in brick & mortar and library sales as closures and budget cuts have affected them, but we have also seen an increase in the online paperback, ebooks and audiobook sales.  When weathering change, mindset is everything. It’s extremely important for creative people to stay connected to their purpose. With all of the chaos, fear, and violence happening in the world right now, we have to take care of ourselves, take care of each other, take care of our physical and mental health, and continuously nurture the parts of ourselves that the world needs us to express. Doing that amidst everything else right now has been feeling extra hard for a lot of us lately. But it is also through our creative process that we can make sense of these things and having a resilient and purpose-driven mindset is key.

RO: Eraserhead Press has gone through various stages of evolution and explored a lot of territory over the years. As a small press publisher, I look for niche audiences that I can connect authentically with and publish books that will appeal to them. For me, this means people who enjoy among other things: weird fiction, DIY culture, cult films, gaming, geek culture, comic books, punk rock, goth, splatterpunk, surreal memes, weird art, dark humor, 80s pop culture, dystopias, apocalypses, occultism, horror, sci-fi, fantasy, fairy tales, myths, philosophy, guerilla gardening, and all sorts of oddball weirdo stuff.

Eraserhead Press currently has 384 titles in print and four active imprints. Our main line, Eraserhead Press, is focused on high-quality bizarro fiction. We are one the founders of the bizarro fiction genre and have been the leading publisher in defining its literary style. Our other imprints are Deadite Press which focuses on weird, splatterpunk and extreme horror. Fungasm Press, edited by New York Times bestselling author John Skipp, which focuses on genre-busting cult lit, And The New Bizarro Authors Series imprint which focuses specifically on finding new voices in the genre.

ZB: A question that’s been buzzing around: Why aren’t NBAS [New Bizarro Author Series] and Eraserhead books automatically released as eBooks along with the paperback?

RO: Thanks for the question. Each book we release gets its own unique launch strategy and I like to try lots of different marketing techniques, stay flexible, and see what works best. Oftentimes, we release the ebook and the paperback simultaneously. But I have also been experimenting with other approaches. The strategy of releasing the ebook after the paperback has been out for a while is similar to the reason why paperbacks aren’t traditionally released at the same time as hardcovers. Hardcovers make more money, so publishers wait for those sales to dwindle before releasing the paperback. The types of readers that choose ebooks versus paperbacks tend to be different.  If we release the ebook when the “new” excitement for the paperback starts to wear off, the book becomes new again and it reinvigorates discussion and interest amongst not just with the ebook readers but also paperback readers.

ZB: What’s next for Eraserhead Press? Any exciting releases in the near future?

RO: Yes! We have a lot of exciting new books coming up. This month we released The Bad Box by Carlton Mellick.

For almost 20 years, Carlton Mellick III has been writing some of the strangest and most compelling novels the bizarro fiction genre has to offer. Described as one of the top 40 science-fiction writers under the age of 40 by The Guardian and “one of the most original novelists working today” by extreme horror legend Edward Lee, Mellick returns with a short novella about the horrors of childhood.

Little Benny isn’t very good at taking tests. It’s not that he’s a stupid kid or doesn’t pay attention in class. It’s just that he’s absolutely terrified of failure. It doesn’t matter how hard he studies. He gets so nervous that he freezes up and his mind goes blank, rarely even answering a single question before the time is up. This is especially difficult now that he’s in Mrs. Gustafson’s fifth grade class, where the punishment for failure is to draw a curse from the bad box—a magical device that permanently mutates children into horrific monsters.

The Bad Box is an absurd horror story for fans of Mellick’s creepy cute novellas such as Mouse Trap and Every Time We Meet at the Dairy Queen Your Whole Fucking Face Explodes.

In October we will be releasing Captain Clive’s Dreamworld by Jon Bassoff.

“Captain Clive’s Dreamworld winds its way through an eerie, Lynchian landscape, populated by Stepford citizenry, cursed lives, and all the bleak sensibilities of the most dire Cormac McCarthy tale. Bassoff’s latest is a must read for fans of the genre, or any reader who prefers their fiction with a sense of the off-kilter. Highly recommended!”

“Jon Bassoff’s nightmarish bizarro novel Captain Clive’s Dreamworld reads like an extended episode of The Twilight Zone mixed with Twin Peaks mixed with Dante’s Inferno. Unremittingly dark, this roman noir is a trenchant attack on the empty promises of capitalism…a hopeless rebuke of the bright plastic flesh built around the broken, crumbling skeleton of the American Dream.

After becoming the suspect in the death of a young woman, Deputy Sam Hardy is reassigned to the town of Angels and Hope, which, within its borders, holds the once magnificent amusement park, Captain Clive’s Dreamworld. When he arrives, however, Hardy notices some strange happenings. The park is essentially empty of customers. None of the townsfolk ever seem to sleep. And girls seem to be going missing with no plausible explanation. As Hardy begins investigating, his own past is drawn into question by the town, and he finds himself becoming more and more isolated. The truth—about the town and himself—will lead him to understand that there’s no such thing as a clean escape.