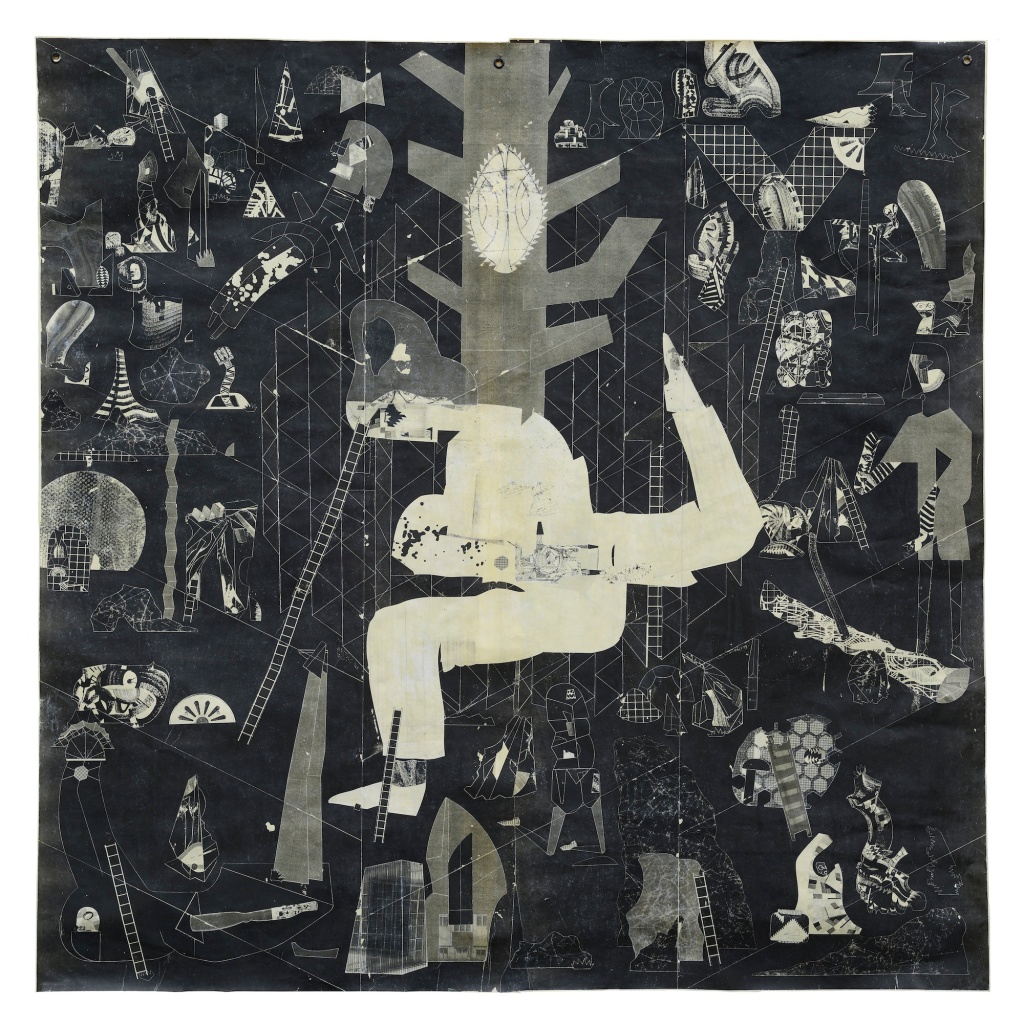 Robert Hardgrave is a visual artist. He makes things that are indescribable. They are also things you want to look at, and keep looking at, and look at again. His work ranges from tiny to enormous and through myriad techniques and media, all without ever losing his unique aesthetic. He’s also just the gentlest, most soft-spoken guy you could ever want to meet.

Here are just a few of his accomplishments: he has exhibited in numerous solo and group shows in Seattle, Los Angeles, San Francisco, Denver, Chicago, New York, and Madrid, Spain. He’s been a finalist twice for the Cornish College of the Arts Neddy Award in Painting, and he’s been a nominee for the Portland Art Museum’s Contemporary Northwest Arts Awards. He’s a member of the Duwamish River Residency, and his work is part of the permanent collections of Microsoft, Starbucks, King County, and the Achenbach Foundation for Graphic Arts. And (as if all of that weren’t enough) Robert recently completed a commission for the Washington State Convention Center which will be installed in late 2021 or early 2022. Right now, he’s preparing a long play moving picture that will emerge in the next few years built around the idea of “Play.”

So let’s hear from the man already!

AMY VAUGHN: For people unfamiliar with your work, how would you describe it?

ROBERT HARDGRAVE: I’m a rule maker/breaker. I limit my materials to just a few things so I don’t get overwhelmed by choices. I let my imagination help me find the images by tinkering with the pieces. My work is mostly black for aesthetic reasons, while I feel it also reflects the world around us. My work is narrative although not the kind that takes you to a conclusion.

AV: Almost everything you do is abstract and improvised (which is some ballsy, punk rock shit considering the scale of some of your work). Is there a certain state of mind necessary for that kind of creation? Do you have to somehow escape everyday consciousness?

RH: It’s a matter of trusting my instincts and allowing the materials and/or tools to shape how they are processed, at times including content. I’m a firm believer in having a bounty of things prepped for the next thing to happen. I bounce around the studio doing all sorts of different things so they can be distilled at a later time. So I spend most of my time making a lot of nothing. It’s sort of like writing too much and then editing it into something poetic and mysterious.

AV: You’ve worked with a lot of different media, some simple and some really complex. Once you become familiar with a medium, does it go into your repertoire, to be used when you feel like it’s the right tool, or does it grow stale or boring?

RH: Yes and yes. Yes, things do become tired, but since I can move into a different media easily, rarely am I bored. I enjoy finding methods of separating myself from my general tendencies of organizing and making marks. Collage really opened up a lot of possibilities because of its immediacy. In fact it gave me the freedom to not be hindered by failure. Learning new methods and experimenting with different tools is always refreshing, often leading to new ideas within more familiar media.

AV: You’ve been making art since the 80s. Do you ascribe periods to your work?

RH: Not really. Life really shapes your work into how it looks laid out behind you. If something really excites you it can sometimes continue for years until it becomes something different.

I think I was working towards art all my life. I was always really good at playing chess as an elementary student, building my strategic, problem solving mind; and then skateboarding in my teens taught me how to use what was available to entertain myself while realizing improvement comes from practicing. I don’t really break things into periods because it’s all the same to me. I am an obsessive maker. There always seem to be more ideas than there is time for.

AV: Would you consider your work to be surreal in any way?

One of the first artists I began emulating was the Surrealist Max Ernst. Some of my first paintings were made with Decalcomania, a method known to be discovered by him. Decalcomania is painting a piece of glass and laying it onto a painting surface. When you remove the glass it leaves an interesting impression which you can search for shapes to form into objects, figures or scapes. The work I am making now Involves a lot of play, recording that play and then rebuilding it into something more intentional. I want images to be a person, place or thing that suggests something familiar but you’re not sure why. I attempt to build them in such a way that they can be read multiple ways.

AV: Can you talk some about how success has affected your attitude or motivation?

I guess it comes down to how you define success. Success for me isn’t about how much I can exhibit and become known but rather making the work I want to make while making enough income to allow me the opportunity to make more. I would say I have been able to maintain my studio for quite a long time. And, I still love making things.

AV: Do you play an instrument? And more broadly, how does music interact with your creative process?

RH: In the late 80s, early 90s I played the guitar, although not well. I wish I had continued playing the guitar, but I sold it to purchase an Apple G3 when I was going to design school at the end of the 90s. Oh well. I don’t do design any longer either.

I have been playing the drums now for about a year and a half and absolutely love it. I began playing them when I began learning stop-motion animation. I thought it would be a good match since they are both time-based activities. I have learned that it will take me a lifetime to master both. Off in the distance, I can see how they will be valuable skills. Both processes have really changed how I think about the future of my work.

Then there is Death metal. I can’t get enough. \m/

AV: This interview is happening in 2020, so I have to ask: how have the pandemic and protests and politics affected your art life?

RH: Well I think we are going to see some fucked up shit, but I also believe we will overcome and adapt to whatever ends up happening. It is certainly an interesting time to be living. I try to not let all this stuff bring me down. It’s tough though. I’m quite nervous about being outside of the house these days. I’ve developed an anxiety being around other humans. Certainly the authoritarianism frightens me more.

I feed everything into what I’m making. How can we not be angry about how things are going here in this country, on this planet? I intend to make art that has a sense of urgency and bleakness, meant to reflect it all back on ourselves.

AV: Where can people see and/or buy your art?

Folks can purchase directly from me. I don’t have a “store” to go to, but I post on instagram regularly. I have sold work there from time to time (@hardgraverw). Or you can visit my website which is more of an archive of previous work (roberthardgrave.com).

Amy M. Vaughn is the author of Skull Nuggets (Bizarro Pulp Press) and the editor of Dog Doors to Outer Space (Filthy Loot). Her forthcoming books include Freak Night at the Slee-Z Motel (Thicke & Vaney) and The Shelter (Cabal). She is also a contributing editor at Babou 691.