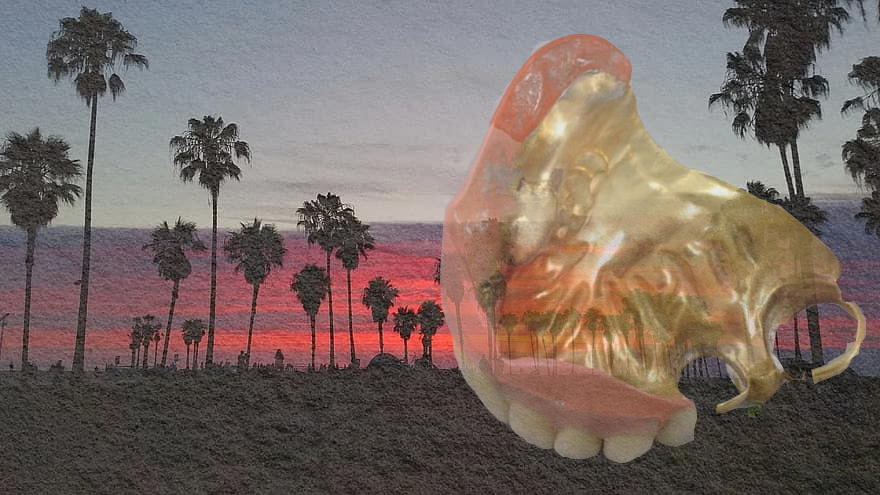 By KKURRTT and Tex Gresham

In Paul Thomas Anderson’s seventh film, Inherent Vice (based on the 2009 novel by Thomas Pynchon), Joaquin Phoenix plays Doc Sportello, a burnt-out private detective living in a fictionalized Gordita Beach getting stoned on his couch and dreaming about better times. The film is set in 1970, with a post-Manson Los Angeles still suffering from its paranoia. Doc can’t seem to get his life in order much, but is put on a case by his ex-lover Shasta Fey Hepworth––who he still harbors feelings for and often dreams about. So he crosses town, uncovers real estate, drug, and dental conspiracies, attempts to rescue a “dead” undercover informant, and butts heads with Nazis and cops––including his anti-buddy Detective Bigfoot Bjornsen, Renaissance Cop. But Doc digs far past what anyone would expect from a dirty hippie. What does he uncover? Man, he doesn’t even know.

KKUURRTT: I think about this movie almost every day. Maybe it’s because I live at the beach, but it might also just be because I am a bit of a burnout trying to figure things out myself. Do you think that you dream more when you are by the ocean?  Do you miss it?  I think it has probably saved Doc’s life.

Tex: Doc would die if he were landlocked. He is the beach––everything you go to the beach for is in his DNA, so it definitely saved his life.

K: What about you? Are you the beach? I don’t think I’m the beach. I like the ocean, but I hate the sand. We never even see him near the water, do we?

T: No, I am not the beach. I am too high strung. I do miss the beach and feel like I did dream more––though I did not create. Which made me feel like I was doing something wrong.

K: What is creation? Who cares? I mean sometimes you just gotta huff nitrous in an office and not mind so much about ends meeting. Doc seems to have purpose even though he’s lost. Why’s it so hard to accept that sometimes our situation defines who we are more than the narrative we write in our own heads. Why does creation equal purpose?

T: Not doing, not creating, is what happens between the cut. No one wants to read a blank page or see a blank screen. And Doc may be lost, but he’s creating a path through the lostness. It might not be real, but it’s something he can try and look back on and go, “Okay, I’ve done something.” Creating a mystery. Creating a reason. Creating a myth around a relationship gone to the past. That’s what Doc is doing this whole time. Creating purpose, even if that purpose is unsolvable. Trying to do what the hero typically does.

T: Totally. Which could be what this whole movie is about. For us to even see it, for it to even be real, it’s got to be made into something and not just remain nothing.

K: For sure and the book is Pynchon––

T: Hang on, you son of a bitch. Now lemme ask you a question.

T: Is this even a surrealist movie?

T: Probably? That’s the best you can muster?

K: I mean he’s stoned the whole movie. Sometimes he reacts like a Bugs Bunny cartoon and other times he feels like Bogart solving the Maltese Falcon.  I don’t know, I think that dichotomy is surreal as hell?  Neither can exist in our world, especially not together. The book feels like Pynchon working out what it’s like to be stoned and researching on missiles and shit for Gravity’s Rainbow. If I keep digging I’ll REALLY understand rocket science. If I keep asking the right questions I’ll uncover a vast criminal conspiracy and save the girl of my dreams and then she’ll love me again. Maybe Batman is Picasso. Sherlock Holmes is Damon Wayons playing Homie the Clown. There’s magic in research.

T: Did you know there are people who think Pynchon is CIA? A part of me thinks Doc is CIA.

T: Well there’s all that informant shit with the hippies. Doc was a “skip tracer.” He seems to know how to get out of any situation and often doesn’t suffer consequences for anything he does. He navigates a successful negotiation freeing Owen Wilson’s character, which he’s so deep in conspiracy and government stranglehold that I don’t see how anyone not “in the know” or under deep cover could do that.

K: Do you think he was an LSD test casualty? Like Ken Kesey, the Unabomber and Doc.

T: MK Ultra failure? Probably. Which is why he’s so apt to crush a man’s head with a toilet bowl cover and shoot someone so perfectly. It’s the awakening of the Ultra-ness. Shasta’s his code word. Like Manchurian Candidate shit.

T: Or write what you don’t know because there’s this automatic paranoia attached to doing that. You could be wrong about everything… But also: what if you’re right? And I feel like that connects, but maybe it doesn’t.

T: That’s a lot of people’s code words––at least according to all 31 seasons of COPS.

K: Is Bigfoot real? And obviously by Bigfoot, I mean the police officer character played by Josh Brolin and not the bipedal cryptid of the American Pacific Northwest. Doesn’t he just kinda seem more like that cop from the commercials rather than an actual living breathing character existing in this world?

T: What better friends and enemies can you have than the ones that live in your head? Is he real? Yeah. But is he Doc’s bud? Probably not. He’s the other side of the coin. He’s the cop that Doc could be, and Doc’s the stoner Bigfoot could be. Together they reach the film’s climax. Everything they do is in service of each other. Everything. Left brain, right brain.

K: You know that moment where you’re so mad at someone, but you haven’t actually talked to them yet, so you just let it build up in your head? And you start arguing with them anyways, until the point that the fight gets worse and worse and you’re subconsciously saying things you can’t take back?  That’s what I think Doc is doing with Bigfoot and Shasta and the Golden Fang conspiracy.  DOES he drive across town? Leave the couch? Or does he just think about it and let it play out in his head.  I for one ain’t leaving the beach on the weekends.

T: He leaves the couch, but for one person. Owen Wilson. Shasta is an idea, a motivation. Sortilege is encouragement. Denis is moral support. Bigfoot is the big foot in the ass. But he’s doing everything for the return of Owen Wilson to his family. So he does leave and explore and move in real time, but interacts mostly with figments.

K: Hazy daze wandering through a post-Charles Manson Los Angeles. I’ve been there. One night I was walking to a bar in Echo Park and this person POPPED UP in the backseat of their car. I was like ‘this is how I die.’  But of course I was stoned too. Was there even a person in that car? We’ll never know.

T: I kinda had a similar experience where I drove past someone and they looked at me and their face morphed into this sharp-toothed demon face and they opened their mouth at me. And it didn’t hit me that that’s what happened until like a minute later. But did it really? Was it the famous LA Vampires? Like the real vampires people think inhabit LA… not the band.

K: Was it an Ice Cream Truck? Were you playing Twisted Metal 2?

K: I think this movie would make a good video game. Where you’re just like wandering around and picking up clues, but there’s no actual mission. Kind of like Myst with acid flashbacks.

K: Exactly. Creation’s dream. What even is real? Make it seem like the beach exists when the truth is, it doesn’t.

T: Or maybe the beach is the only thing that exists. Everything else is the dream. Why do you think PTA [Paul Thomas Anderson] did this movie and chose to be oblique about almost everything in it when the rest of his movies (aside from The Master) are fairly heavy with literalism and exactitude?

T: Intellectual property that he didn’t really have to work hard to write, yeah. Sort of reductive though, no?

K: I don’t know, man. A good filmmaker isn’t limited to one set of tools. Maybe the oblique is hard for him, but having something solid to steal from makes it easier. This is what makes him interesting, none of his movies are truly alike. Punch Drunk Love has those Jeremy Blake interludes.  Magnolia ends with frogs falling from the sky. Maybe his nods toward the surreal are more subtle in the rest of the oeuvre, but they’re there. This is probably why the world has been praising him for 20+ years.  It’s always something different.

T: Sure. See ya next month.

K: Well, we’ll talk between now and then, right?

Inherent Vice also stars Katherine Waterston, Josh Brolin and Owen Wilson. KKUURRTT and Tex are frequent collaborators. Together they host a postmodern film podcast with the same name as this column.

KKUURRTT is glad you read his thing. His novel Good at Drugs is forthcoming from Alien Buddha Press. He can be found on Twitter at @wwwkurtcom.

Tex Gresham is the author of Heck, Texas (Atlatl Press). His work has appeared in Hobart, F(r)iction, The Normal School, BOOTH, and Back Patio Press. He lives in Las Vegas with his partner and kid. He’s on Twitter as @thatsqueakypig and online at www.squeakypig.com.