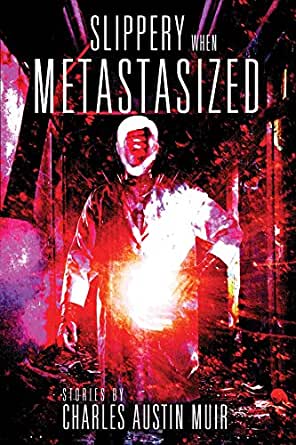 Never doubt the healing power of writing. In a previous review, I looked at Sam Richard’s collection To Wallow in Ash, written following the passing of his wife. He used these stories as a way to cope with what must have been soul-crushing grief. In a similar way, Charles Austin Muir’s collection Slippery When Metastasized was spawned from his wife’s diagnosis of cancer and the multitude of emotions that came with it. He uses the permanence of words to solidify these ethereal emotions.

Muir has written two other collections so far: This is a Horror Book and Body Building Spider Rangers, both of which I would highly recommend. Like those books, Slippery When Metastasized contains hilarious, well-crafted, intelligent stories without succumbing to pretension. Muir describes his collection as:  “absurd, surreal, meta, pop-culture-laced, sentimental, satirical”—his style immediately recognizable.

The collection begins with the titular story “Slippery When Metastasized.” A man’s best friend has been diagnosed with cancer—only his friend is a sentient filmstrip from Star Wars. They navigate the convoluted complex that is the Bad Medicine Clinic, in search of hope and the answers they so desperately seek. It is a surreal parody of the modern hospital system, equal parts funny and disturbing. As someone who’s read nearly all of Muir’s oeuvre, I can say it might be my favorite story he’s written.

The collection continues on this wacky bent with “Naked Liam Neeson Gets Woke.” The perpetually nude action star must rescue his ninth daughter from his eleventh marriage from the Russian crime lord Douchebakov. Muir freshens this amalgam of action movie tropes with his own bizarre take. As in other stories, he goes all out in naming the characters, including “A Micro Insult From 1991,” “Well, Actually,” and “Christian Bale’s Batman Voice.”

“Before the Def Leppard Pyromania Virus Destroyed Us” tells the story of a world consumed by a deadly pandemic that makes people speak in spam—presciently written two years before COVID. In “Smoke Nurse,” we meet a new Charles Muir in this beautiful sci-fi tale about mortality and the end of life. Honestly, I would not have recognized it as Muir if not for the author’s name.

Things return to wacky with “The Time I Took Hamlet Right into the Danger Zone,” in which Prince Hamlet shares an immortality elixir with a Tom Cruise look-alike, starting their adventures through the future. It is classic Muirian gold, dripping with 80s references.

The collection concludes with “The Last Glorious Ride of El Barko Poderoso,” the story of a beloved dog’s last hours and a metaphor about the human beings behind social media polemics. Inspired by the passing of Muir’s own dog, I choked up reading what is every pet owner’s greatest and inevitable fear.

Muir displays his goofy side and his profound side, sometimes separately, often fused together. In parts, my eyes watered. In others, I chuckled and smiled, his humor delivered so effortlessly. Pop culture is Muir’s ultimate tool, creating metaphors and images more powerful and vivid than flowery language ever could. At some points, however, his narration muddles, creating a story that’s hard to follow—at least for me. This was most noticeable in “Insidious in the Month of June.”

In many stories, including three mini vignettes/essays, Muir uses the theme of “truth cancer,” a metaphor drawn from his wife’s illness. He expounds on how anyone with limited knowledge and too much jargon can create what they perceive to be an infallible truth—solely based on their personal narrative—and inflict it on the world through that weapon of good and evil: social media. He describes truth cancer as a “mutation and disease of reductionism … that spreads and spreads,” a way of boiling down bits of science to find the truths people want.

It has been fascinating to watch Charles grow as an author, his writing becoming stronger, crisper, more diverse. I hope these stories helped him surmount the adversity in his life. They certainly provided me with a broader vocabulary of the human condition.