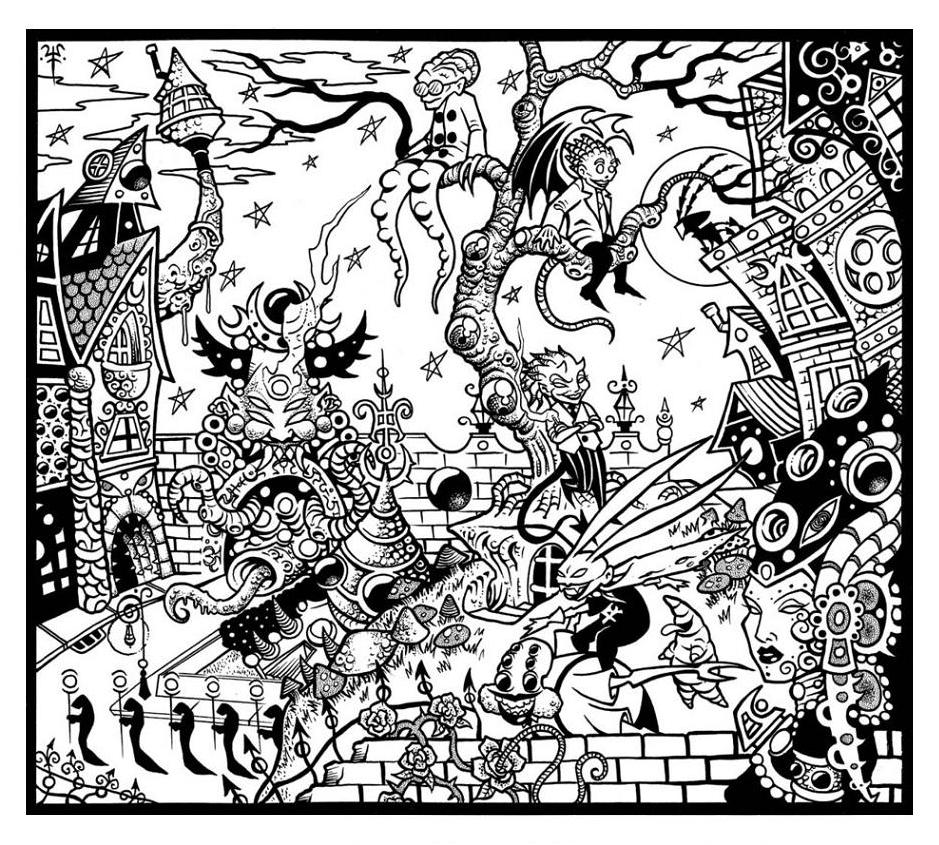 Eric York’s illustrations are full of monsters and a good portion of them have been created while working at a haunted hotel. Who better then to interview for Halloween? His style is striking—almost entirely black and white, it can be stark and complex at the same time; it is highly polished, showing enormous attention to detail; and the content, while often (though not exclusively) Lovecraft-inspired, is uniquely weird.

I dig Eric’s style so much that I have repeatedly turned to him when I needed illustrations for a book or, say, if I needed a logo of an ocelot named Babou. He is one of the most disciplined creatives I’ve ever known and a genuinely warmhearted guy. I’m happy to have this chance to catch up with what he has going on and to share it with all of you.

AMY VAUGHN: Hi Eric! Where to start? How about, for people who don’t know your work, how would you describe your style? Who are your biggest influences?

ERIC YORK: I consider myself primarily a cartoonist and illustrator. Though I like to draw stuff that is a little bit off the beaten path, I still think of myself as a traditionalist in my approach to art. The style is influenced by comics, cartoons, pulp illustration, tattoo art, role-playing game drawings, paperback cover art, heavy metal and punk illustration. The usual bunch of influences for artists of my age and background. Specific examples of my influences would cause me to go way over my allotted word count but I can drop a few: Lovecraft (of course), Clark Ashton Smith, William S. Burroughs, Robert Anton Wilson, Thomas Ligotti, Virgil Finlay, Hannes Bok, Lee Brown Coye, Erol Otus, Mike Mignola, Jim Woodring, Aubrey Beardsley, Harry Clarke, mythology, folklore, weird fiction, entheogens…

The pen and ink techniques I use are pretty standard with cartoonists—a thick outline, solid black areas, various degrees of detailing and use of open areas of negative space. I’ve been fortunate to have been able to combine and filter all these influences and styles into something that I can consider my own and representative of my various interests, fixations and obsessions. My style is pretty easy to recognize once you’ve seen a few samples of it.

I was talking with an artist friend recently about the basic themes of our art. I told her that one of my goals is to evoke vague but alluring and strange memories of childhood. I’m basically a big kid and my art is for other kids, of all ages.

AV: You’ve done so much cool stuff. Besides illustrations for how many dozens of books (really, I couldn’t find an exact number, do you know?), you’ve also created zines, a tarot deck, a 100-page graphic novel of Lovecraft’s poems, and—if I have my research right—you had a long-running comic in your community newspaper. Oh, and you were included in the Ars Necronomica exhibition in 2017! So, have I left out anything important? And, of everything you’ve done so far, what are your favorite accomplishments?

EY: Geez, when you list it all out like that, it makes me seem obsessive or something 😛 I had a t-shirt printing company (Wyrd World WebWear) with D. Michael Southard. We mostly ended up making shirts for our friends’ bands, and it got to be more work than we could afford or find time for. But it was fun while it lasted. I basically want to put images on any medium that they’ll work with. I’ve made stickers, posters, shirts, bookmarks, post cards, Krampus cards. I’m always looking for new formats and media to try out.

I’m not sure what I would consider my favorite accomplishment, but the 150 or so Zygote’s Fables comics that I did for the weekly paper were definitely the most challenging long-term project I’ve ever done. I was able to have a totally free hand in using the comic to express my various interests, obsessions and views of life, the universe and everything. I’m amazed I was able to do it every week without totally blowing a fuse. It was extremely cathartic for me, but there’s no way I would ever try something like that again.

AV: Let’s talk about the Hotel Monte Vista, which has been called the most haunted place in Arizona, and where, until recently, you were the night auditor. How long did you work there? Did you find it (after the two popular bars in the lobby closed for the night) a good atmosphere for drawing? Do you have any ghost stories?

EY: I worked there for 14 years… 11pm to 7am. Then Covid-19 hit and screwed up everyone’s party. I’ve actually been getting by very well and thank my lucky stars nightly. Working at an old, haunted hotel definitely had a strong influence on my art, and the quiet, spooky atmosphere after hours was perfect for me. The Hotel Monte Vista’s two bars are the most hoppin’ nightspots in town, so that has provided inspiration (and consternation) in different ways. As for ghost stories… well plenty of people have claimed to have seen and experienced a variety of weird shit… I’ve even had whole families check out at 3am, totally freaked out about “something in their room”. But my experiences are less visual and difficult to describe. I have felt strange sensations and inexplicable shifts in consciousness and changes in the awareness of my surrounding environment. But that doesn’t make a lot of sense, so I’ll just say that sometimes I’ve gotten the heebie-jeebies and leave it at that…

AV: Besides drawing, you’re also a writer and a musician. Do you find the different disciplines to be synergistic? Do they ever compete for your attention?

EY: My art muse is in full-on Durga War Goddess mode and she won’t let my music and writing muses even leave their houses! This is causing some internal difficulty for me since I really like playing music and writing. But I’ve learned that when my art muse is on her nuclear-powered scorched earth war-path, I have to let her do her thing and stay out of the way. I’m just along for the ride at this point. I’m not about to try to rein her in, even if I were able to. This year has been my most productive ever and I’m slated to break 1500 hours of working on art. (I keep a daily art journal to keep track of everything). But hopefully next year I can juggle things to where I can write and play music again since those things are part of me as well.

AV: What are you working on now?

EY: I have two new Phantom Bellboy comics that I’ve done for the hotel; four sets of myriorama cards; two large 11”x17” prints that will combine Dungeon and Dragons style maps with comics narrative; family tree posters for the deity/monsters of H.P. Lovecraft, Clark Ashton Smith and Greek mythology; Exquisite Corpse refrigerator magnets (my visual version of magnet poetry); prints of my Infernal and Supernal Alphabets; new bookmarks; deity archetype cards, stickers, more comics… geez, too much stuff! Shut off the damn tap, yo! It gets to be a bit overwhelming at times… I can’t stop it. It’s a compulsion. But I figure there are worse things to be addicted to than creativity…

AV: How can people find you and your work?

EY: They can find me on Facebook where I go by Reginald Braithwaite (don’t ask…). I post art daily.

I also have over 2200 pieces on my Deviant Art site:

Thank you, Eric, for being a nonstop inspiration and creating such cool stuff! If there wasn’t enough in this article to encourage a person to check you out, they don’t deserve you.

Amy M. Vaughn writes weird little books like Freak Night at the Slee-Z Motel and Skull Nuggets. She’s also the editor of Dog Doors to Outer Space and a contributing editor at Babou 691.