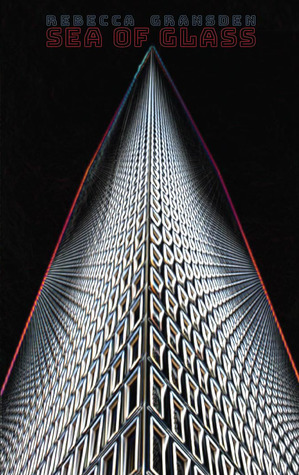 When a strange accident happens on the street, Kattar, a janitor in a skyscraper, finds himself taking refuge through the front entrance of his workplace  Realizing the accident may have terrible further consequences, he attempts to find an exit to make his way home. However, in his attempts to find the desired “EXIT,” he discovers that reality seems to be falling apart within the building.

“Screw work today, how could they dare penalise him for taking off as soon as he could? He foresaw the battle with his bosses because he expected the beast to bash him always, then calmed himself from caring too much. Worst case he’d lose this forsaken job. He’d take the first EXIT and sleep until the consequences.”

Sea of Glass is a surreal headtrip with elements of fantasy and horror. While Kattar makes his way through the building, he runs into monsters, living dead, and people giving him small quests in exchange for assistance. All of this is told in colorful prose painting dreamlike pictures in words.

The most obvious theme in the book concerns the stultifying effects of corporate bureaucracy and the modern workplace. Throughout his journey, Kattar runs into people who have been mutilated, deformed, or destroyed by the forces within the building, but they accept this mostly with nonchalance. It’s simply part of the normal operations to them.

From the beginning, the word “exit” is almost always stylized as “EXIT.” The obvious meaning of this is that Kattar is so bent on finding a way out, that even the text itself emphasizes it. It also reminds one of an exit sign. This is a very visual book in its prose and the word capitalized like that, one of the few unusual pieces of form in the novella, evokes the image of a glowing red exit sign in the dark.

Inadvertently, Kattar discovers a creature called the Wayfarer that threatens to destroy not just everyone in the building, but the entire city. Despite this, Kattar remains focused on his goal of getting out of the building. It’s less out of selfishness and more out of learned helplessness. In the face of  forces that seem overwhelming, be they Eldritch abominations or neoliberal capitalism, a person is often forced to focus entirely on themselves.

The book ends on a pretty ambiguous note. I’ll avoid giving spoilers, but while I believe it fits the book perfectly, there will be many who find it frustrating. I don’t view this as a bad thing, but after the practically nonstop intensity of the book, I expect that many readers will be begging for a clearer resolution.

Sea of Glass is an excellent novella. Despite its often dense, heavily descriptive prose, it remains a fast-paced, engaging story that’s funny, often unsettling, and full of unexpected moments. I think it’s a novella well worth reading, despite the fact many may find the prose difficult and the unending unsatisfying. I highly recommend picking up this book and reading it one sitting. It’s the kind of book that should be experienced all at once as a kaleidoscopic nightmare.