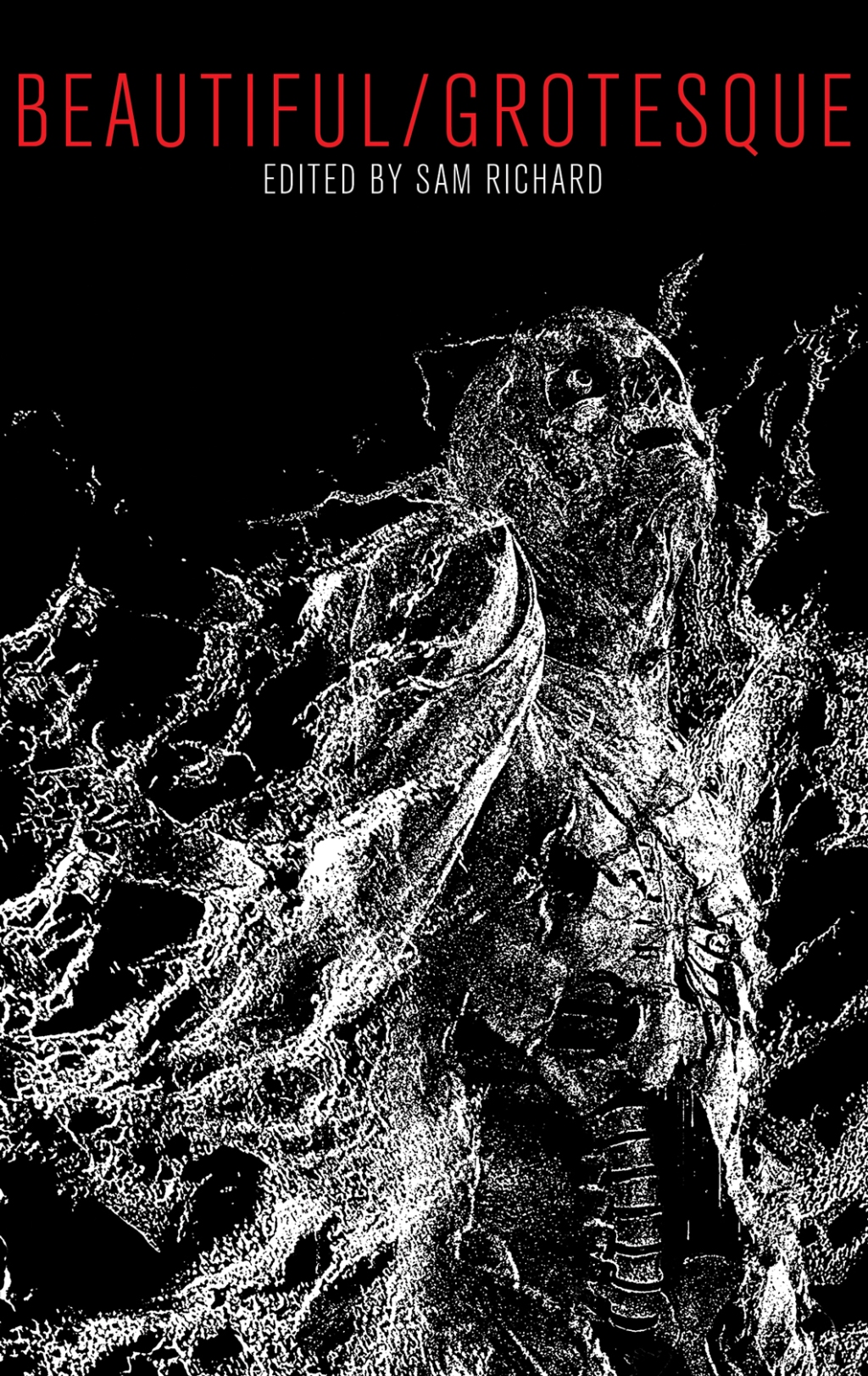 When is an anthology not an anthology? When it’s a mini-anthology, of course! Not satisfied with delivering up a bunch of excellent novellas in recent months, Weirdpunk Books now brings you Beautiful/Grotesque, five brand-new stories involving aspects of beauty and grotesqueness, inspired by an image by artist Zdzisław Beksiński. The stories all come from names which fans of Weirdpunk may be familiar with – and if you’re not, this is a great introduction to their styles.

Roland Blackburn’s God of the Silvered Halls kicks things off with a story of terrible appetites and questionable ethics in a city morgue. Dissecting the notion that stealing beauty means paying a dangerous price, it offers bloody moments, a keen sense of unease and some chilling imagery. As the longest piece in the book, it takes its time, often teasing the possibility of an easy way out for its lead character before she’s pushed further along her unfortunate path.

Next up is Jo Quenell’s Threnody, and whether you have to consult a thesaurus or not to see what the title means (I did), this soon pulls you in with a fantastic first line and keeps pulling, the tension gradually increasing to uncomfortable levels. The plot involves a young pianist hired to play at a funeral service, who gets drawn into family drama both outside and inside of her own circle. It’s a richly textured, gripping story, with a touch of body horror alongside observations about guilt, grief, self-doubt and isolation.

Third is The Queen of the Select by Katy Michelle Quinn. Set in modern times amidst the COVID crisis, you’re shown how masks of various kinds can slip, as a depraved police officer tries to fit in amongst a group of equally sick high society types, while one of their victims tries to survive their perverse advances through a bizarre drug-induced fantasy. The atmosphere evokes memories of Eyes Wide Shut, the terror-in-suburbia feel of Blue Velvet, and there’s a touch of Society too. By the end, all these elements are whipped together in a frenzy of flesh and fucking that puts Clive Barker to shame.

The penultimate piece is Joanna Koch’s Swanmord, which takes a surreal trip through mythology, art, sex, music and death. At times baffling but never boring, you’re pulled through every emotion imaginable as a pair of quarrelling lovers share their intimacies. It reads very much like an experimental piece of poetry given room to breathe, and as such it’s the toughest story to get to grips with in terms of narrative. That said, the story paints such vivid pictures with its language that it doesn’t need a straightforward plot, its imagery taking firm hold of your mind and refusing to let go.

Finally we have The Fruit of a Barren Tree by Sam Richard, where thoughts of an old gun lead a grief-stricken man down a path lined with uncomfortable memories and troubling notions. Here a metaphor for suicide blooms into something that’s both beautiful and grotesque, just like the book’s title promises, lending the story a haunting, tragic tone. The earthy, fairy tale-like horror lends itself perfectly to the story’s theme, and as grim as things get there’s a kind of bittersweet peace to the events that unfold.

All told, Beautiful/Grotesque is a successful experiment in paring down a themed anthology to a shorter format; an effective slice of haunting, weird stories. That said, trimming away some of the fat that occasionally weighs similar anthologies down left me hungry for more, so hopefully we’ll be seeing more mini-anthos from Weirdpunk before too long.

Ben Walker is a writer/reviewer from the UK, with reviews appearing on Ginger Nuts of Horror, Kendall Reviews, and in Unnerving Magazine. He also has a booktube channel, BLURB, and is easily distracted on twitter @BensNotWriting.