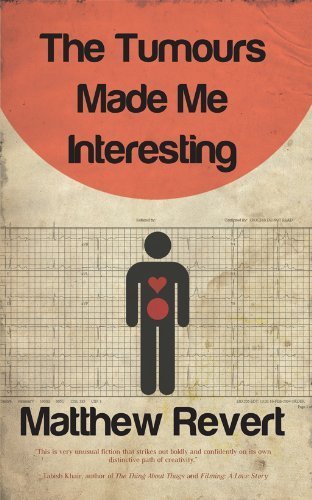 Life is, more often than not, a mild disappointment. It’s rarely the catastrophic disappointment we convince ourselves we’re going to accept with cynical stoicism. When the storm really hits, we cower and hide.

Matthew Revert is probably best known as a graphic designer and artist. His work graces the cover of many books, including two of my own. However, he’s also an excellent author in his own right. I originally read some of his short stories in the purple edition of the Bizarro Starter Kit and instantly loved his prose. Despite his considerable abilities as an author, only one of his books (not counting an art book) is currently in print and, even then, only as an e-book. Which is a shame, especially with his first novel, The Tumours Made Me Interesting.

Bruce Miles is a put upon man who’s been taking care of his sick mother since he was a child. Unable to rely on his indifferent older brother and his father who was carried away by a falcon, Bruce has felt his mother is the only one he had a real connection with. Now as an adult stuck in a dead end job, he receives a diagnosis of bowel cancer. At first, he resigns himself to his death, but then he meets Fiona. Fiona assures him that his cancer is a very special kind. One that makes him a very special person.

There are certain books that are awkward for me to read in public because they have me laughing out loud every other page. This novel is one of them. Revert comes up with hilarious and absurd situations for Bruce to find himself in. For example, when Bruce reluctantly goes to the doctor because his symptoms have become too severe, he confides that he has a lot of blood in his bowel movements. The doctor reacts with over-the-top disgust. This is followed by the doctor shoving his fist up Bruce’s ass and pulling out one of his tumors.

Despite the wacky humor in the book, it maintains a heavy sense of melancholy. Bruce has not had a good life, but persists nonetheless to take care of his sick mother. When Fiona makes him well-known and respected for his disease, he’s forced to cut off contact with his mother, but develops a connection with his neighbors, a man who lived in his ceiling, a mother who is convinced she’s dead and her daughter, and, of course, Fiona. Despite growing weaker due to the disease inside of him, he becomes more satisfied and confident. He feels he has a real purpose, even though it’s killing him and he’s very much afraid to die. When he learns that Fiona’s intentions are far more sinister than he was led to believe, it shatters him and leaves him adrift. He once again has nowhere to go, but his mother.

Revert’s prose is excellent. He paints vivid pictures of the ridiculousness of Bruce’s situation without any winking at the audience or trading emotional verisimilitude for jokes. I honestly can’t think of an author to compare Revert’s style to. Even other bizarro authors don’t seem to match what Revert does in this novel.

As an author, Revert is one of a kind. He’s funny, emotionally hard-hitting, and writes in such a way that makes it all seem effortless. While it’s a shame this book is out of print, the good news is that it is set to come back soon. 11:11 Press is set to release this novel, as well as Revert’s first two short story collections later this year (2021). When this Unreprinted is in print, I very highly recommend picking it up.

A special thanks to Zakary McGaha for lending me his copy of this book.