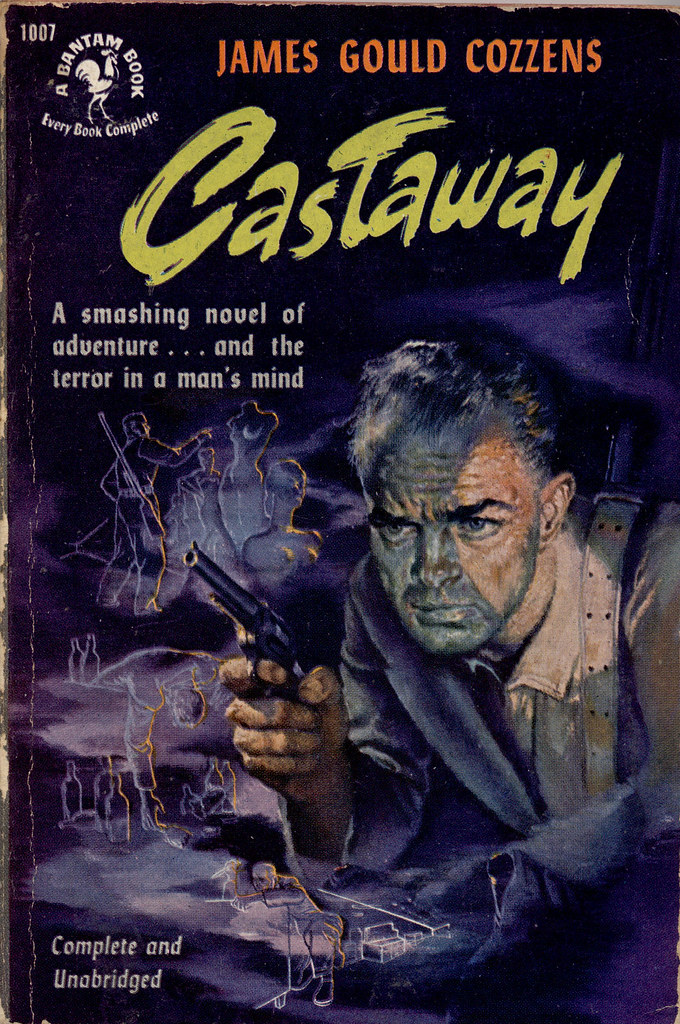 After surviving an unknown disaster, Mr. Lecky takes shelter inside a department store. Despite the abundance of supplies, Mr. Lecky has trouble adjusting. Most of all, because he finds someone else has made their way into the store.

The fears he had formerly felt of hearing, and then of seeing, seemed to have changed a little. He was aware, unreasonably, of a reluctance in his perplexity, like a fear knowing; or a resistance to it, as though he were half persuaded that what he did not know would not hurt him.

Cozzens is an author who time has mostly erased. He was a prolific writer who had his first book published his sophomore year of college in 1924 with his last released two years before his death in 1978. In 1949, he won the Pulitzer Prize for his novel Guard of Honor. His 1957 novel By Love Possessed was a critical and commercial success, receiving rave reviews, becoming a best seller, and being made into a movie. He was on the cover of Time magazine and seemed to be on the way to becoming considered a great American author after decades of only moderate success.

However, a perfect storm of many factors stopped Cozzens’s career in its tracks and quickly removed him from favor. The movie based on By Love Possessed was a critical and commercial failure (nowadays it’s only remembered for being the first in-flight movie); follow-ups of that novel didn’t come for nearly a decade and consisted of a short story collection and his most critically panned novel; and the changing tastes of both the public and the literati meant few were clamoring for more Cozzens anyway.

Besides all of this, the two biggest factors that were seen as destroying his career were his interview in Time and an incredibly harsh review by Dwight Macdonald in Commentary magazine. Cozzens’s interview revealed that the prejudices against women and minorities often expressed by the characters in his books were reflections of his own, and he had a bad attitude towards almost all contemporary writers. He generally came across as such an unpleasant person that it alienated many readers. Dwight Macdonald’s review of By Love Possessed not only picked apart that novel but called out other reviewers for being fooled by what Macdonald saw as cheap tricks to make the book seem smarter than it was.

However, among Cozzens’s work, especially with hindsight, Castaway stands out. It’s the only non-realist work among his novels. In fact, it approaches surrealist in many ways. Critics who despised most of what Cozzens stood for had praise for this novella. Even looking through the editions of it that existed through the years, it’s obvious publishers didn’t know what to make of it. Some of them packaged the book as a genre thriller in the vein of authors like Bloch and Hammett, while others as a Kafkaesque head trip. Though, really, the book is both.

The most obvious themes of Castaway are modern alienation and the psychological effect of consumerism. Besides the title, the novella opens up with a quote from Robinson Crusoe. The fact that Mr. Lecky is alone in a department store, a place usually bustling with people, rather than an island or a forest makes his isolation all the more disquieting. My essay on liminal spaces previously published on this site is especially relevant here.

Despite his isolation, Mr. Lecky’s fears of what he encountered outside the store and who may be hunting him inside it prevent him from worrying about loneliness. His thoughts only turn to how alone he is once he believes he’s eliminated any threats. He turns to drinking witch hazel to forget it.

Despite the abundance of resources inside the store, Mr. Lecky finds enjoying it impossible. He can barely make decisions on basic survival so stifling are all the choices presented to him. At one point, Mr. Lecky decides to eat canned soup for dinner, but can’t actually decide which one to pick off the shelf. He nearly has a panic attack when he tries to choose. He eventually has to close his eyes, grab one at random, and rip off the label to force himself to make a choice.

Throughout much of the book, Mr. Lecky seems as if both modern life and the store itself have made him useless in any survival skills. He passes out on the stairs from exhaustion at one point , he can’t decide where to sleep because of the many choices, he burns himself cooking, and he fumbles to figure out things like how to swing an axe and fire a gun. Mr. Lecky seems to be more dangerous to himself than the person in the store with him, who he dubs “the idiot” because they’re apparently incapable of understanding Mr. Lecky’s attempts to communicate with them.

The book has an unusual pace. It’s slow for its short length, with Mr. Lecky bumbling around the store, punctuated by scenes of paranoia and a surprisingly bloody battle with “the idiot.” There’s also a lot of dry humor, such as when Mr. Lecky goes to the book section and chooses one to read entirely based on the cover having a silhouette of a nude woman.

The ending is the strangest part of the book. I won’t spoil it here, but it has Mr. Lecky finding out the identity of “the idiot” and it puts much of what happened in the book in question. While I’m tempted to view the twist as a bit heavy-handed, it’s delivered in a convincing way. Even as I write this, I’m still turning over in my head the many implications of it.

Castaway is a fascinating novella that remains relevant despite being published in the 1930s and written by a reactionary author. It explores how, despite the abundance many find themselves surrounded with, they’re still miserable and incapable of making connections. I can’t speak for Cozzens’s other books, but I think Castaway deserves to be sought out and to be brought back in print. The good news is that Sam Peckinpah, who found inspiration in the book, wrote a screenplay based on it and there were rumors of it circulating among producers as recently as 2018. With any luck, that not only means a movie of it will be made soon, but that the book will be coming back into the public eye.